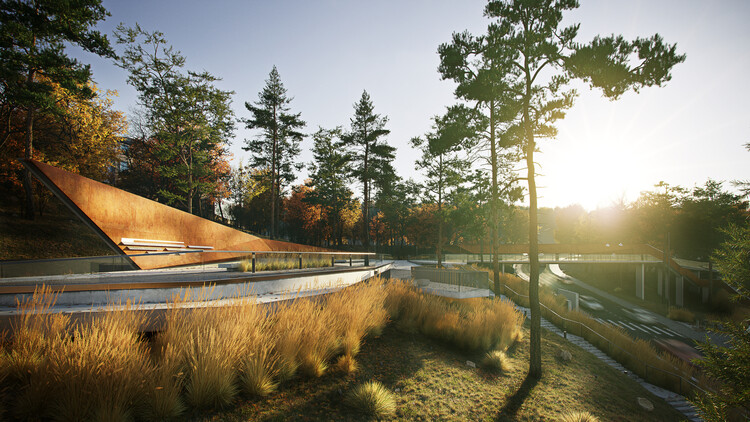 Text description provided by the architects. This minimalist space conveys the spirit of modernity and perpetuates the memory of the Heroes of the Heavenly Hundred who sacrificed their lives during the Revolution of Dignity. In the competition, the task was to choose a neglected site in the center – the historical part of Lviv, which is part of the UNESCO zone. This is a complex terrain with large level variations (more than 10 meters). After analyzing the relief, we tried to inscribe the space in the historically formed environment, thus dividing it into different level zones.

The memorial space consists of the main square with a memorial stele and walking terrace paths with access to observation decks. On the stele, there are portraits of Heroes, and the form itself resembles a barricade, a shield, a kind of “breaking point in the country’s history” and the indomitable spirit of the people.

The observation decks offer panoramic views of the city, and these areas, together with the main square, create a public place of remembrance with the possibility of holding open exhibitions. The memorial complex has become a meeting place for hundreds of visitors. It is a place of reincarnation of an abandoned space into an open one, which conveys a feeling of peace, inviolability, and freedom.

The following tasks were solved in the project: memorialization of fallen Heroes, preserving the memory of historical events, creation of a modern public space with the possibility of holding exhibitions on terraces and squares, partial reconstruction of the historical terraced relief, creation of new viewpoints on the city panorama (about 13 church complexes are viewed).

Our main task and idea were to rethink the vision of memory in the form of a monument – to transform it into a public space, to move away from stereotypes, and to create a memory space that unobtrusively carries history. The main criterion from the families of the fallen Heroes was to replace the carved stele names of the Heroes with their portraits; we solved this problem and created portraits in one graphic style, under each of them the names and life credo.

Locals were most concerned about the preservation of the historically formed environment of the place, its existing perennials, and viewpoints. In our project, we tried to locate the space so as to preserve the maximum number of trees, only the sick and self-seeded plants were cut down. Consoles protrude above the hill, where you can feel the peace over the noisy city, supplementing panoramic points.

The total area of the plot – is 0.9140 ha. The memorial stele is based on a concrete wall; its metal frame is made of 210 different-sized parts and is lined with sheets of Corten steel. The visual appearance of the stele resembles flame, soot, and burning barricades, which became symbols of the Revolution of Dignity. On the stele, there are portraits made of stainless steel by laser engraving. The square in front of the stele, which occupies 550 sq. m, is made of concrete, inserts of chipped granite, and supplemented with greenery.

Walkways and consoles are made of high-strength concrete. Decorative cereals are planted all over the complex, resembling ears of wheat, which is a symbol of the Ukrainian people. The lighting of the memorial is also an important element. The main light line runs under the stele. Together with the Corten steel, the light creates a feeling of burning fire. It is noticeable from afar that this line seems to cut through the hill, creating a burning scar that has remained in our history.

Back to Buriram! The title fight touches down in Thailand