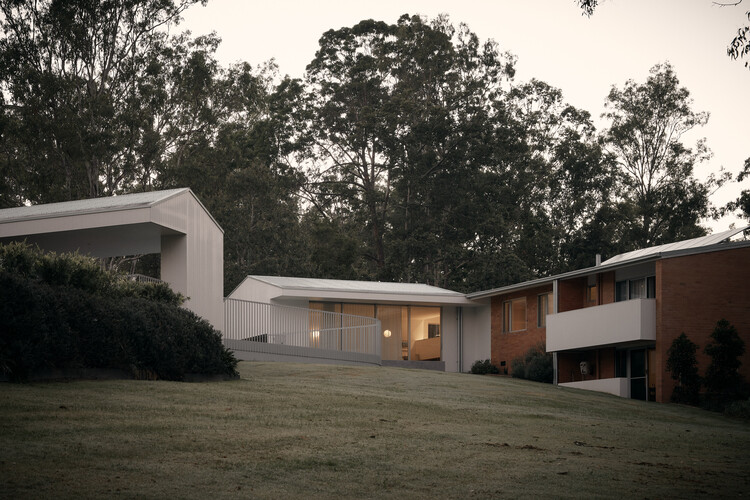 Text description provided by the architects. On sloping land beside a creek in the semi-rural outskirts of Brisbane, Pinjarra Hills House adjusts and extends a simple 1970s brick dwelling to better engage its occupants with the landscape, and each other, as part of their daily lives.

Context and Brief. The brief for this family home was to improve the social spaces and their connection with the swimming pool, increase the spaciousness and usability of the kitchen and bathroom, and clarify arrival and entry for visitors. The family’s core daily activities had previously been conducted in separate zones which were poorly interrelated. A key project objective was to stitch these activities together, allowing the family to cook, dine, play, swim, and relax within an expanded and interrelated domestic realm.

The critical deficiency of the original house was its physical and visual disconnection from the site. The kitchen and dining spaces were shrouded by a low pitching patio roof which darkened the interior. Circulation between inside and outside was constrained by a tight dining space, pinched by an oversized pool enclosure, and topographically challenged due to previously altered ground levels.

Design Response. Working with a modest budget and ordinary materials, the core design philosophy was to emphasize the fundamental qualities of space and to enable an awareness of the sky and landscape both from the outside and inside. The new works include two sibling forms loosely arranged along a high contour. Together they restructure the open space between as a terrace for the pre-existing pool. The forms accommodate a family room and pavilion and present long edges as apertures to the dense eucalypt and pine tree canopy. In response to the straightforwardness of the original 1970s gabled house, the gabled additions are formally assertive and composed of few materials.

A desire to enclose the north and east for privacy from the neighboring residence prompted a corresponding strategy to amplify daylight within the new interior. To this end, daylight is introduced from above via three open skylight shafts, distributed to balance light levels across the room and to register seasonal and diurnal daylight variation. Door, window, and skylight openings are positioned at floor, wall, and ceiling edges in order to diffuse soft daylight across entire surfaces and minimize glare. More than simply living in the house, the reconfigured and extended house now allows the owners and their children to inhabit the landscape.

One Drawing Challenge: 13 Creative Superstars on the Competition Jury